Featuring short plays by some of the North West’s most exciting new writers, join us as we journey through 6 different worlds. Meet interstellar visitors, solve a murder and arrive at the shores of a new land as we explore life from a female perspective. 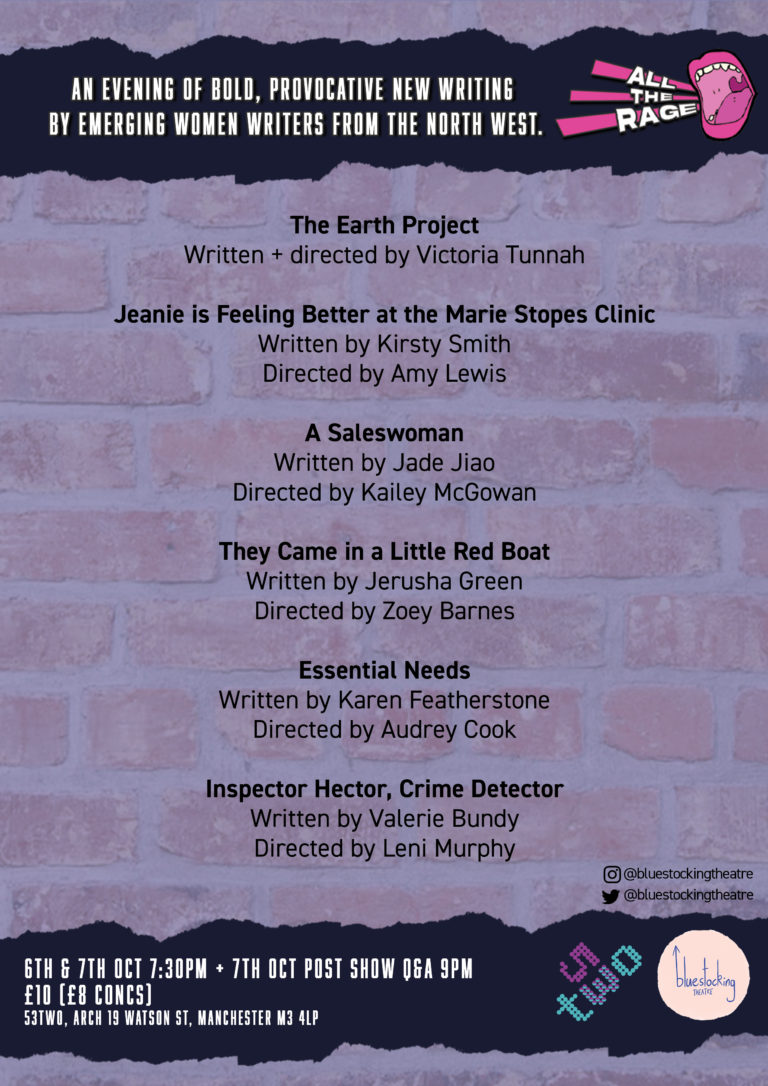 ‘They Came for My Mother’ is a new play written by emerging playwright Victoria Tunnah (recently shortlisted for the Royal Court Playwriting group) and is the second production from Bluestocking Theatre.

Coming round and realising she’s trapped, B has nowhere to go and no one to turn to but A, who is more animal than human. Focusing on the two women as they’re locked in a squalid bedroom with nothing but themselves, the shadows beyond the door and the same three channels on repeat, how long before the women have to face themselves and each other? This is a funny, electrically charged look at the shit women have been dealing with for eons. Powerful and raw with elements of absurdism and bouffon clown. We see women’s glorious strength and vulnerability, their power in extraordinary circumstances to overcome stifling sexual exploitation and oppression. It looks at the control of girls and women and the intersection between trauma and addiction.

The play explores religion, class, female rage, mothering, and what happens to children when they’re sexualised. Inspired by the realisation that for a lot of women lockdown hasn’t been all furlough, yoga and baking banana bread, for some women they have been trapped with their abuser.

Emergency Door Release explores society’s expectations of women, the inherited narratives that shape our view of ourselves and the world and the devastating impact that can have. It follows party girl Louise as she has a breakdown, the realisation dawning that she’s about to hit thirty and the clock is ticking, loudly. Meandering through her soul snatching career, diabolical love life and slavish addiction to alcohol, we watch as Louise grapples with the choking feeling that something is very, very wrong.

‘Victoria Tunnah’s portrayal of a Mancunian woman struggling in today’s society of uncertainty had a charm and believability that had the audience listening intently…Tunnah’s prose was witty, sharp and relevant and written in a wonderfully believable, conversational tone. And thanks to director, Josie Cerise, her movements were natural and contained a good energy throughout. Nothing felt forced, which is in keeping with the writing style…This is not, however, a play made by women for women. The men in the audience also found humour and alarm in this production. This truly is a play which highlights women’s place (or lack of) in society and attempts to right that wrong. And it is carried out wonderfully by these three women.’